There's a countdown clock in the Ohio State Buckeyes' massive strength training complex. A constant reminder to everyone involved with this program of when the BIG game kicks off. If you're a player, it's in one's subconscious. Time is ticking away..... will you be ready? Have you applied enough effort into the workout sessions? How's your bodyweight? Is it where it needs to be? The Mettler~Toledo®  scale is right across from the countdown clock that every player steps onto for their daily weigh-in as a strength coach takes notice and records the data on a master sheet.  The scale is right between Coach Mick's office and the assistant strength coaches' office.  There's no question that it's a big deal. Mickey Marotti, the Director of Football Sports Performance for the Buckeyes knows what each player is expected to weigh. At the basic level, he and his very knowledgeable staff, are responsible for making sure the players are packing on muscle and report to fall camp at their prescribed weight. The added muscle combined with being in great football condition along with daily improvement of their speed, agility and balance is critical and paramount to superior results in the coming fall season. Superior results in this program means WINNING.
The foam rollers were out in the Buckeyes' indoor facility as the players filed in for this morning training session and grabbed one. The strength staff; Marotti, Kenny Parker, Niko Palazeti, Quinn Barham and Zach Higgins are set for the first of three groups this morning. There's no question as to the tradition here. Championship, as in National Championship, banners adorn the walls of this indoor facility. The players know the expectations here. Win. And, win championships. Yet, down on the west wall of the 130 yard facility are the words 'TOUGH LOVE'. And, after observing Marotti-led programs for over thirty years, this slogan is the epitome of the strength and conditioning program here. 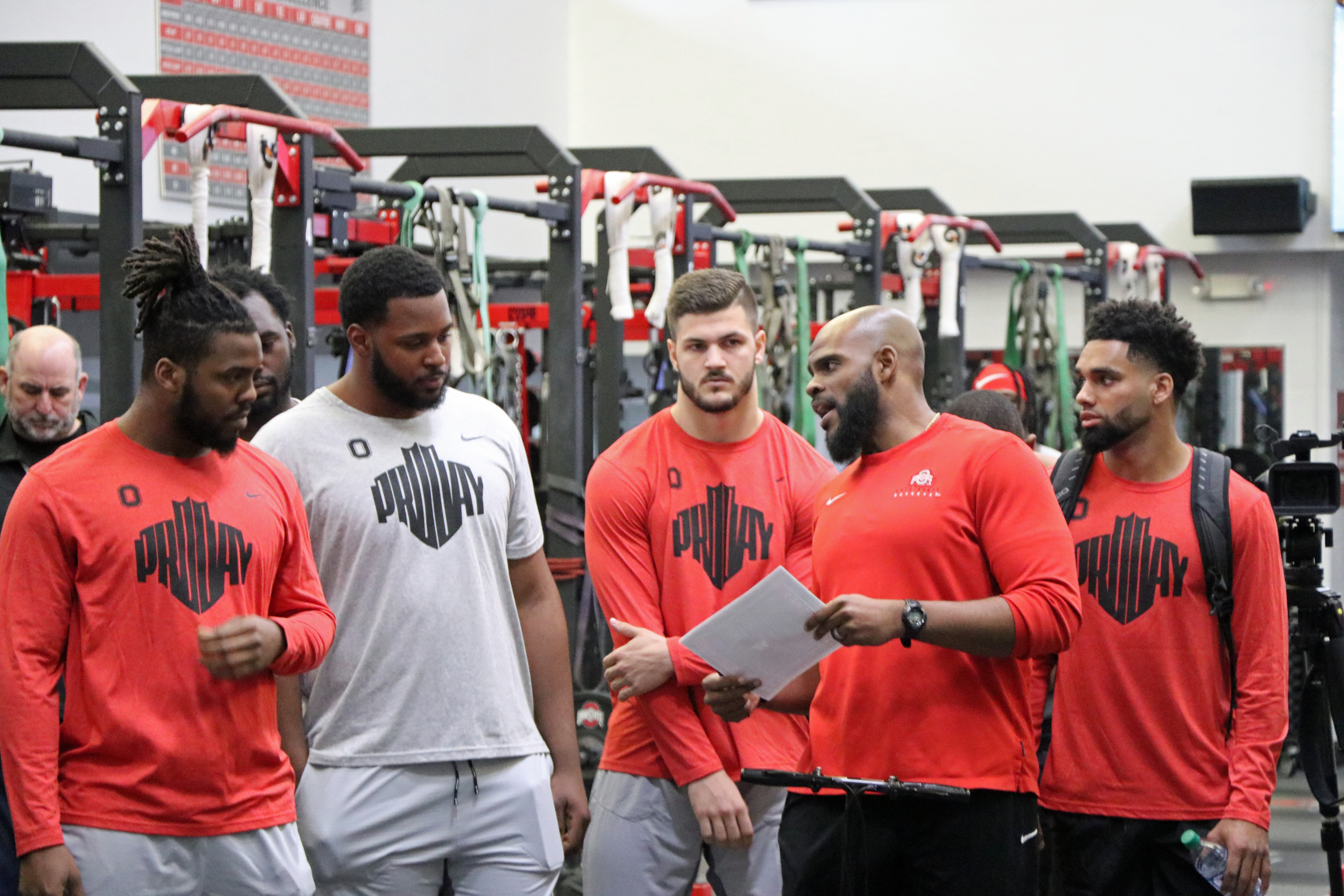 The tough love is doled out mostly by the strength and conditioning staff. They spend more hours with the squad than anyone else, including head coach Ryan Day! So, for today's Athletic Strength and Power Podcast, we reached out to the team's assistant director of strength and conditioning, Quinn Barham. Like the players on this football squad, he knows the expectations of being at Ohio State, as well. The banners and the expectations at Ohio State drive the competiviveness of the strength coaching staff.  Barham is beginning his seventh year as a coach for the Buckeyes and like the other members of Marotti's staff, Quinn definitely possesses all of the necessary qualifications of a head strength and conditioning coach at the NCAA Division 1 level as well as professional football, too. Though, working with the Buckeyes and fellow coaches, Parker, Palazeti and Higgins is very rewarding as they're all highly motivated and working in a positive climate.
The countdown clock is visible from Coach Barham's office desk and for him, every minute of every day counts.... there's no time to waste. He know what's expected.

And like the guy whose name is on the building, Woody Hayes, stated, "You Win with People".
The Buckeyes are in good hands!
Today's podcast discussions points are:

This ASAP Podcast is sponsored by: